Wake up to Money

When BBC Radio 5 Live’s Wake Up to Money programme invited me to be part of the Disability Works season, I was hesitant about making such an early appearance. 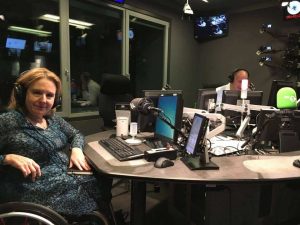 Though entrepreneurs are supposed to thrive on early starts, I am embarrassed to reveal that I am not a morning person.

However, there’s a benefit for even us owls when joining the larks at BBC Broadcasting House; London traffic is very light at 5am.

It is a lot less troublesome than the ‘crush’ hour; there are no big traffic queues and no drivers losing their tempers at traffic wardens and roadworks. As public transport is very rarely a practical option for me, it was a rare treat to reach my destination on such peaceful streets.

I was delighted to be part of the national conversation about how to create a more inclusive world; many thanks to the Wake Up to Money Team.